Blog: Running to alleviate child poverty
2 September 2021
Our work to help feed hungry children during lock down has caught the attention of two enthusiastic runners.

Keen to see our work in action, we invited Cam and Cozzy to come along to our summer holiday programme kindly funded by Abel & Cole.

We heard about School Food Matters (SFM) in early 2021, during the third national lockdown. At a time when child poverty was increasing, we learned that SFM was delivering tens of thousands of nutritious breakfasts to disadvantaged kids. It was a cause and a charity we felt we had to support. We decided to do just that by running every other day for a year to raise awareness and money.

Six months and 440 kilometres later, we were lucky enough to be invited to St Mary’s Catholic Primary School in Battersea to see the charity’s holiday food and fun programme in action.

We were met by Stephanie Slater, SFM’s founder, and the school’s Executive Head, Mr Brading, who was giving up his summer holiday to help out. Serious dedication! They explained how SFM pays for the school to bring around 50 kids in per day to cook, garden, sculpt and play…all within a familiar and supportive environment.

The children were in their element. When they weren’t moulding clay hedgehogs, they were chopping vegetables donated by Abel & Cole to make lunch, which they planned to take home to their 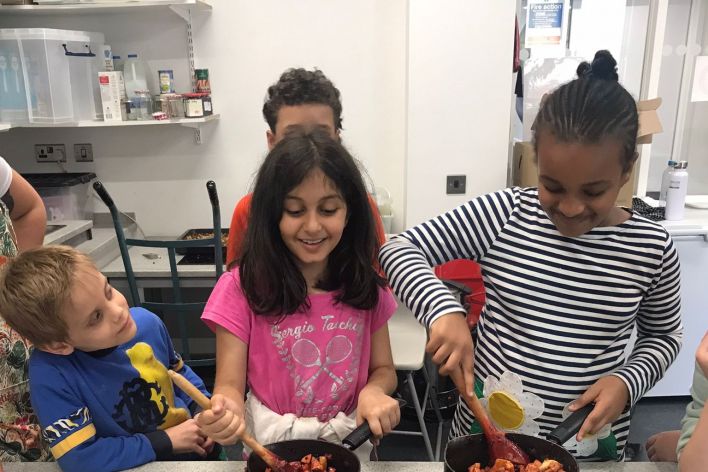 One floor up, we saw the school’s vegetable patch - full of potatoes, carrots and bulbous marrows - and met Cath Baynton, SFM’s school gardener. She helps the kids get their hands dirty and gain a sense of where their food comes from. It was great to see that the long tradition of school gardening is making a comeback. 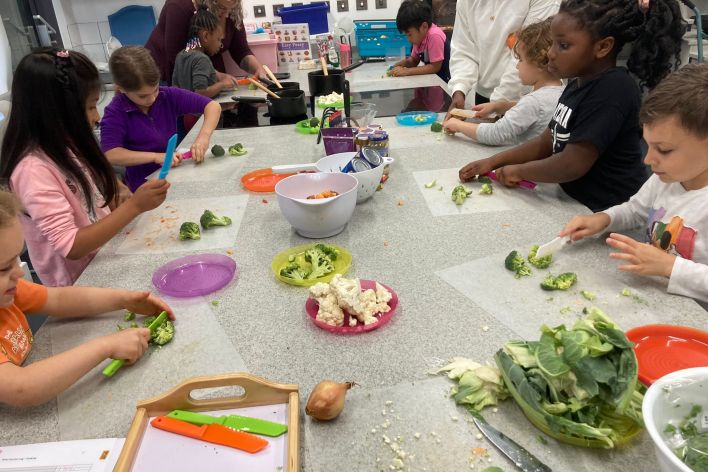 By this time, the kids had filled the playground and were racing around and playing tennis. Cozzy felt that there was nothing for it but to join in and throw himself down the slide!

Visiting St Mary’s was a great experience and has only strengthened our resolve to do our bit to support the work of Stephanie and all her colleagues. Cameron has the Cambridge half marathon coming up and is hoping to run 1,000km by the year’s end.

If you would like to donate to our fundraiser, please go to:

Written by Cam and Cozzy

This is part of our Food provision work.
We want every child to have access to nutritious food so that they are well-nourished and ready to learn. That’s why we work with school caterers, headteachers and families to get the best possible food service across the whole school day.