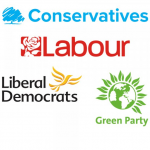 After the past year has seen school food feature in the headlines like never before, it would surely be remiss of politicians to not talk about it at their annual party gatherings. Since the bar has been set high for leadership on school food by Man United’s number ten, here we consider how others with ambitions for number ten compare.

First up was the Liberal Democrat’s conference, which was held online. There was a complete absence of school food in the speeches of both the leader, Sir Ed Davey MP, and the Deputy Leader and Education Spokesperson, Daisy Cooper MP.

Next came Labour. The Brighton gathering hit the headlines a number of times, not least when Old McDonald fell out with Starm, but unfortunately none of these headlines contained the words ‘free school meals’. Nor, for that matter, was there any real mention of school food.

The first chances to hear about school food were from Shadow Education Secretary Kate Green and Shadow Secretary of State for Child Poverty Wes Streeting. When Green mentioned school food in her speech it was only referring to the fact that ‘this callous Conservative government had to be dragged kicking and screaming to provide free meals for children during the holidays.’

On Kate’s plate is Labour’s Children’s Recovery Plan, which does include calls for additional breakfast clubs and for holiday free school meal provision, which is welcome. However, it is a shame there is still no sign of addressing urgent needs in the system such as extending free school meal eligibility and improving standards. The only mention of food from Streeting was in reference to his own childhood.

Having scoured the speeches on education and children to no avail, next up was the Leader’s speech. After 90 minutes of listening, I thought it was full time for school food, until… ‘Here we have it!’ I exclaimed. I heard the name of the unofficial Minister for School Food: Marcus Rashford. Starmer said ‘When the Government ignored Marcus Rashford’s campaign on school meals I was shocked.’ Alas, that was it. Labour’s final whistle on school food blew.

One positive that came from Labour’s conference floor was the unanimous passing of a motion supporting the Right to Food. Enshrining this in legislation will mean there is a greater focus on ensuring all can eat, and proposer Ian Byrne MP’s campaign for this includes calls for universal free school meals and using school kitchens for the wider community.

Focus now turns to Rashford’s home turf of Manchester, where the Conservative Party Conference is in full swing. Following the recent reshuffle, new ministers will be unlikely to make big new policy announcements. The agenda features no mentions of the National Food Strategy, in response to which the Government is currently preparing a white paper, but it may come up in some of the events related to the environment and farming.

We will be paying particular attention to new Education Secretary Nadhim Zahawi and Children’s Minister Will Quince. Zahawi is a former Minister for Children and Families, who set up the pilot for Holiday Activities and Food Programmes. During his time in that role he wrote to headteachers following the Children’s Future Food Inquiry, encouraging them to improve school dining areas, work to avoid stigma, and make free water more accessible. He went on to emphasise the mandatory nature of the school food standards. These are encouraging signs and it is important that school food is not lost in the broad Education brief.

Will Quince is new to Education and we hope he is ready to listen to the experts on school food to catch up on what needs to be done. He has spoken about his weight loss following the PM’s Covid-19 scare last year and has professed to be a convert to increased government intervention. Given that ensuring nutritious school food is a must in tackling childhood obesity, we look forward to his interest continuing in this area. After all, where there’s a Will…

Beyond this is the Green Party conference in Birmingham. The Greens made commitments on school food in their last manifesto, including on local procurement, updated standards and renaming free school meals to tackle stigma. With the majority of their food agenda likely to be taken up by sustainability and environmental policies, perhaps their Education Spokesperson, Vix Lowthion will hear the calls for improving school food.

It is disappointing that the only mentions of school food at parties’ conferences so far were to kick the Tories. The pandemic has exposed not only how important school food is, but also how many problems there are with the system. We know that, when it’s done well, school food has the potential to address a whole range of policy areas, from obesity to sustainability, from mental health to academic inequality. Whoever is in government has the responsibility to reform school food in this country to realise its full potential benefits, starting with a review of the current system’s problems.